The Motor City is a perfect place for an aspiring musician to cultivate a sound different from any other. From his early days playing the guitar in church to formal training as a young adult, Tim Bowman pulled from a multitude of influences and created a sound that infuses gospel, blues, R&B and jazz. After spending 6 years as the musical director for renowned gospel group, The Winans, Tim took a break from the road and eventually decided to embark on a solo career. Since Bowman hit the jazz scene in 1996, he has been winning rave reviews and garnering ubiquitous smooth jazz radio airplay. After Bowman printed up 2,000 copies, himself, and began promoting his first album around his hometown of Detroit, the city’s jazz radio station, WJZZ, started playing four tracks concurrently (Give Me You, ‘Love, Joy, Peace’, I’ll Be There, and Speak To Me) in heavy rotation. One thousand CDs on consignment at Detroit record stores were sold in five weeks.

Eventually, Insync Records picked up the CD and released it nationally. The album peaked at 19 on the Gavin Smooth Jazz Charts and 20 on Radio & Record Magazine’s album chart in the spring of 1997. The single I’ll Be There rose to 18 on Gavin’s Top Twenty singles chart. Bowman’s follow-up projects Paradise and Smile both received widespread media attention and great reviews, as well. In 2004, Bowman released This is What I Hear. In his fourth collection, Bowman surpassed the success of all of his prior albums with his smash 1 single, Summer Groove. The acclaim for This is What I Hear solidified Bowman as a Smooth Jazz all-star and helped to land him a spot on the ’07 “Guitars and Saxes Tour”, alongside Jeff Golub, Gerald Albright, and Kirk Whalum.

The release of Bowman’s fifth album increased his momentum. The self-titled project, the first release for Bowman with his new label home, Trippin’ N Rhythm, generated widespread media and industry success. The collection featured hit songs Sweet Sundays, High Def, and Rapture featuring saxophonist Najee. Heavy hitters Kirk Whalum, Jeff Lorber, Randy Scott, and Darren Rahn all showed up on the record. “I am so blessed to have some of the best musicians in the world on this record”, Tim says of the collaborations. Bowman’s son, Tim Bowman Jr., is also featured on the R&B song, All I Need Is You. Mellow, pulsating tunes like For You, My Love, Sunset, and Soul Dream leave room for no other title except, Tim Bowman.

In 2010, Bowman released The Collection, showcasing some of his finest work and highlighting the unique depth of his ability as a talented songwriter. The Collection features three new tracks, All My Life, his Jazz radio smash Let It Shine, as well as the uplifting Gospel offering My Prayer, My Praise.

His current single, Let It Shine, is already climbing the top of Smooth Jazz charts, finding a consistent flow in Billboard’s Top 10 within a few weeks of dropping on the scene.

My Latest CD "Into the Blue" is available for purchase in my webstore! 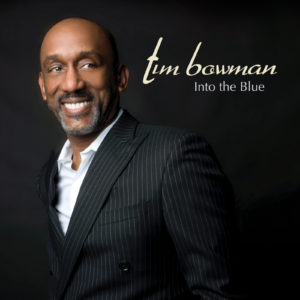